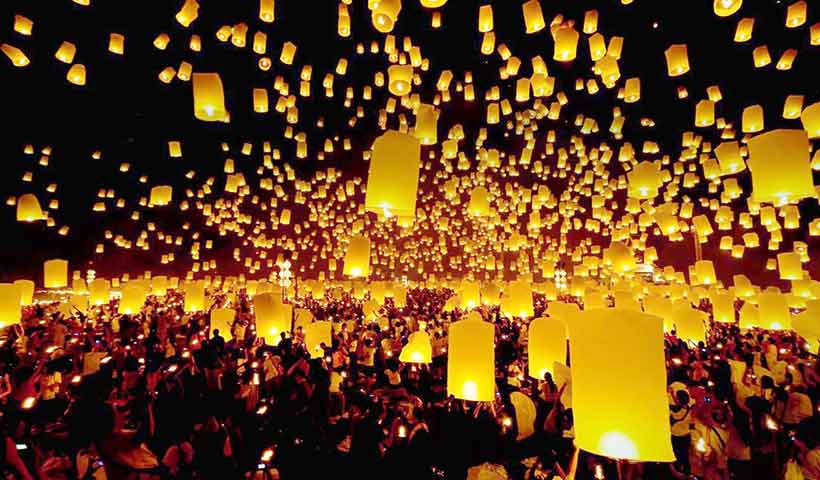 Thailand never fails to amaze its countless visitors with the most colorful festivities and events sure to delight you with glimpses into the country’s heritage and traditions. Here’s a listing of the major Thai holidays and festivals you should not miss out!

As the most important date in the Thai calendar, the Thai New Year or Songkran is celebrated nationwide through various exciting events. Get ready to be wet during this season, as splashing water is the norm throughout (better to bring your own water gun too)!

Enjoy an exciting exhibition on spectacular posters that are available along with the seminars and conferences related to the film. Jazz concerts serve to complement the artistic flavor of the series of events.

Witness the beautiful flower-decorated floats, ladies in the Flower Queen Beauty Pageant and the flower arrangement contest in this highly-anticipated colorful season in the North.

For all veggie-lovers this festival is for you! Or if you just simply enjoy seeing superhuman displays of devotion like scaling razor – ranged ladder, then this festival is not to be missed.

This event is a series of sales fairs organized by community housewives and One Tumbon One Product (OTOP), featuring fruit-decorated floats on parade, best fruit products showcase and modified fruit product contest.

You can relax and enjoy breezy waves of the sound at the Hua Hin Jazz Festival which features both renowned Thai and International Jazz musicians, familiar all-time favorite and contemporary works.

Thailand welcomes the New Year with various kinds of colorful events nationwide. You can head on over to any of their renowned beaches—mainly Pattaya and Phuket, or go up north to Chiang Mai to usher in the New Year with an official countdown. Bangkok also offers a load of parties that will definitely ensure that you start the New Year right with a bang!

Looking to buy property in Thailand?