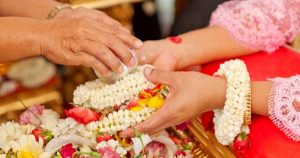 A Thai wedding can be very traditional and cultural, making it exciting and fun. Before the wedding day arrives, there will be a Buddhist ceremony held during which the couple will pay their respects to bridal ancestry. Most often, nine monks will be present during this occasion, sitting with water in before them. Sitting next to the first monk on an altar, the holy thread will be kneaded around the bride, groom, and into the monk’s hand. The holy water that will be used for the wedding day sits before the first monk, holding a candle inside of it. The monks then pray repeatedly and return to their temple.

The morning of the Thai wedding, the nine monks will shower the holy water onto the guests of the wedding, while a holy thread is once again strung circularly around the bride and groom, symbolizing unison together. After this, trays of small dishes are placed before each monk where prayers will be said, and each monk is given money inside of an envelope. This is because the monks are not allowed to touch the money.

Historically, Thai weddings would have a “door ceremony” in which the groom opens gates towards the bridal house. Before opening each gate toward the bridal house, the groom must first provide a gift to become more extravagant with each gate opened. More recently, and modernly, a girl holding a chain is in the place of the gate, and she will receive an envelope of money from the groom.

After the “door ceremony”, a “feet-washing ceremony” will be held. During this, the groom is to stand upon a chair, with his bride bowing below him, washing his feet and symbolizing her respect for him. Whilst this is happening, the dowry is presented to the guests showing that the groom can financially support his new wife, although later returned to the couple, traditionally.

The last and final ceremony to be held during a traditional Thai wedding is the “shell ceremony.” The couple will hold hands, kneeling upon a pedestal, before an elder. Guests of the wedding will sprinkle holy water out of a shell onto the couple’s hands while saying their words, as well as handing them a money-filled envelope. Upon receiving this, the couple will give the guests in return a small keepsake for the wedding.